Buy and Hold vs. Trading

What does “HODL” mean? Actually, it is a typo and should be called “hold”. This term originated in a forum 2013 when a user published an entry about Bitcoin’s crash at the time. In his heading of the post (“I am HODLING”) he made the supposed spelling mistake. This post was spread quickly and Memes came into being and the term “Hodl” was born.

So, this term stands for keeping its coins, even in times when prices are falling. This approach is not new, because the buy and hold strategy has been around for some time and is applied to e.g. stocks and other investments. It is expected to generate profits over a long period of time and it’s a bit more relaxed than trading in contrast.

But the “Hodl” strategy also carries risks, because the market can continue to lose value for years and so the motivation is dwindling and some “hodlers” capitulate and then sell with (heavy) losses. In order to minimize the risk trading comes into play here. So, trading coins are not just bought and held for months or years, the time horizon is much shorter. Since the price of e.g. Bitcoin even in the bear market does not sink like a straight line, but fluctuates with up and down, it is possible to make profits even with overall falling prices.

Here you can find the best trading bots in comparison

Below we’ll look at two people (Person A and Person B) who both buy bitcoin at a fictitious bitcoin price of $ 20,000 in January. However, the two people pursue different strategies.

Person B buys a Bitcoin but wants to trade with Bitcoin. We simply assume that the person trades on a monthly basis.

Now let’s take a look at the portfolio development of both persons over one year.

Person A has bought a bitcoin and keeps this bitcoin with the hope of value enhancement. At the end of the fictitious year, the value of Bitcoin is $ 6,000. Person A thus has a (book-) loss of  $ 14,000 after one year.

Person B buys a bitcoin with the intent to trade from the beginning. As seen in the picture, the person sells the Bitcoin on a first price recovery for $ 16,000. Then the person analyzes the market and waits for a buy signal/entry point. In May it is the right time and the person buys again the one Bitcoin however for $ 7,000 and sells in June this for $ 9,500. The person then waits for an entry point, which is $ 5,000 in August. In the following month, it will be sold again for $ 5,600. Last, the person buys in November for $ 4,200 and sells for $ 6,000. What does the balance look like? 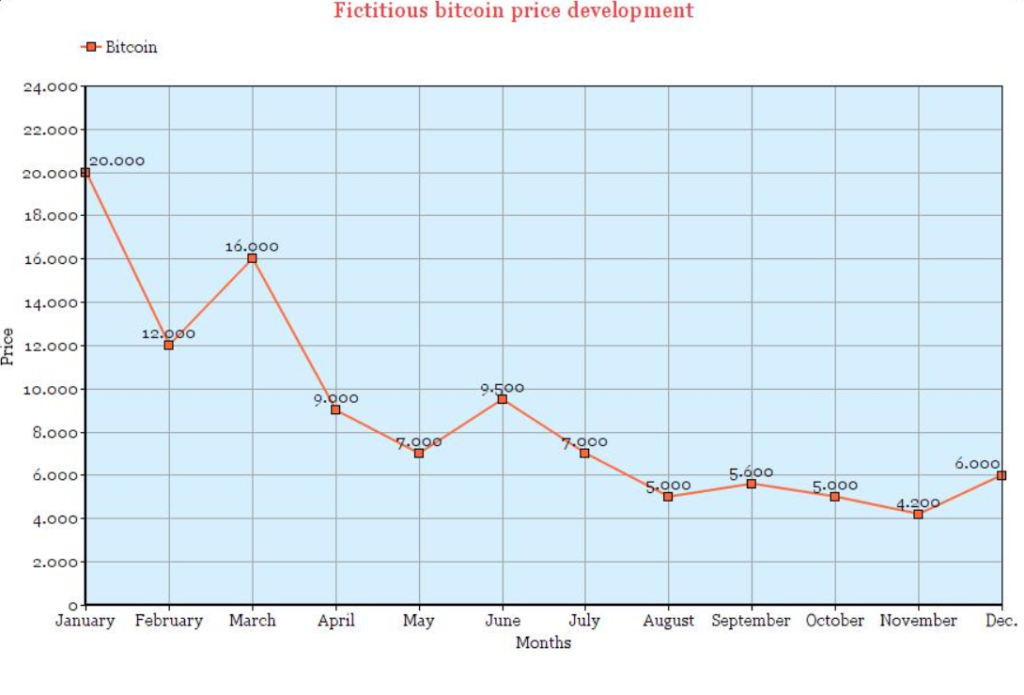 Person A (Buy and Hold):

Even if the course continues to fall after that, it will always recover for a short while and sometimes rise again. No price is linear but up and down (with a downtrend the “down” is longer and steeper).

Despite the same starting conditions (same purchase time and price), the final result is very different. Person A has a loss of $14,000, whereas Person B is $900 plus. Person B thus is able to take profits even if the market is in a downward trend and can realize profits again and again. So Person A in such a situation unfortunately has the disadvantage that it has to accept (book-) losses because of the initial $20.000 is only $6.000 there. To sell in such a case would result in the person realizing 70% loss. Continuing to wait could lead to increased losses.

Of course, this example is greatly simplified and it is assumed that the trader finds the “optimal” entry and exit points. But in this example, we also assumed that Person B acts monthly. So what if you act weekly, daily, hourly or even every minute, and always more often takes a margin?

Unfortunately, such people as Person A are often those who panic at such a downtrend and sell at a loss, or just do not give up hope and keep the coins with the hope at some point maybe to be again at plus-minus zero and to exit the market. So, you see the “Hodl” strategy is suitable when the market is constantly going up or you are investing very long term. Because over many years one minimizes the risk, because both in the classical stock market as well as in the crypto market the course rises over many years, even if it is some years in the downward trend.

In order to take less risk and also to realize profits in a bear market, trading is ideal for this. Of course, the trade must be well considered.

HaasOnline: Bitcoin trading with HaasBot in the test!